With 2019 well underway, there are some exciting trends to look out for in the renewable energy field this year.

Grid parity occurs when renewable energy can be generated at a cost and performance level equal to or less than electricity generated via conventional methods.  Solar and wind power have already reached parity in many countries so we should see continued adoption of these energy sources as well as new ones.

The Spanish government has promised to make renewable energy including solar PV, easier and more accessible for consumers.  Other countries and cities around the world are embracing the goals set to limit the rise in global temperatures.  Already 100 cities worldwide report that at least 70% of the energy produced is from renewable sources and 40 are operating 100% on renewable energy.

Urban planners, politicians and businesses in Oslo all worked hard to reduce Oslo’s carbon footprint with the result that the European Union named Oslo the European Green City 2019.

To achieve this title, Oslo adopted eco-friendly planning measures to create energy efficient neighbourhoods with geothermal wells; buildings with solar water heating and hotels that recycle energy.  The politicians are working to make Oslo traffic free and have closed down street parking and limited traffic with a view to making the city centre car free by the end of 2019.  Cars are being replaced by bikes and parking areas are being turned into parks and green zones.  Visitors to Oslo can stay in eco-friendly hotels and eat organic produce in many of the restaurants.

Sales of electric cars continue to grow steadily in Europe although the lack of charging points is a cause for concern for many people considering a new vehicle.  Whilst adoption may be a bit slow so far in Spain, sales of diesel cars declined last year and more charging stations can be found around and about.  Some people have already been taking advantage of the charging points available at Aldi in Puerto de Mazarrón and it will be a much more common sight over time. 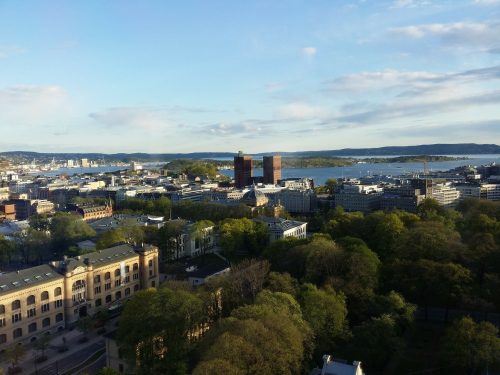